In the final part of our series covering the stages of design thinking, we cover the parts that are possibly the most challenging for a lawyer to get their head around. Prototyping and testing.

a shift in mindset.

When we talk about adopting design thinking principles in law, we often refer to a need for ‘a shift in mindset’, and the prototype and testing stages are possibly the two stages where this shift in mindset is most necessary.

To a traditional lawyer the idea of producing something that might be wrong, requires improvement or might not work exactly how it was intended to the first time around, is likely to bring them out in a cold sweat.  So, it’s this part of the process that requires us to lose the ego and embrace our inner Thomas Edison – it’s time to fail fast!

Before we delve too deeply into these last two stages though, let’s just re-cap on the previous three.

During the empathise stage of design thinking we’ve gone through a process of really getting to know our client, their business, and the problem they’re trying to overcome, and we’ve also considered the impact this problem might be having on their customers or stakeholders.  We’re treating this problem as our own. Sometimes this will be easy because we’ve experienced something similar ourselves and can really resonate with the problem, other times it will require us to probe a bit deeper. Why do they feel so strongly about this particular problem? If you can’t answer this question, then you need to keep probing.

We’ve identified what the problem is during our define stage – now we need to identify what a successful resolution looks like.

For our fictitious client, Awesome Bank, having a set of terms that simply ticked the box would have done just that…ticked a box (quite literally I suspect). But, having empathised with Awesome, we’ve realised that having a set of terms for their customers is more than just a box-ticking exercise. Yes, they need a set of terms, but what they want is for their customers to feel informed about their decision to sign up to their services.  They recognise that this stage of their onboarding process is another touchpoint, and what they want is to remain true to their brand and values by being open and transparent.

And this is where we all get to have a little fun!  The ideate stage is where we benefit from collaboration with diverse thinkers, people from different backgrounds with different perspectives and different solutions. We brainstorm, we explore, and we let the imagination run wild using a variety of interactive workshops before honing our ideas down to what we believe might just be our solution. 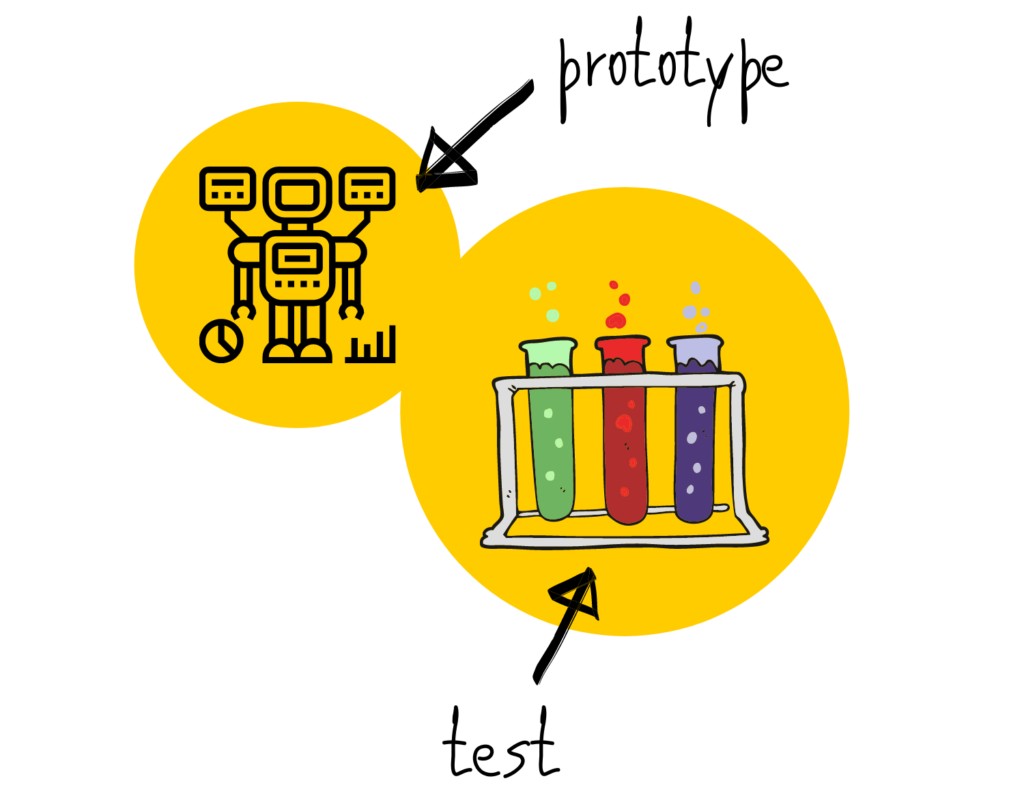 So, quite a bit of work, time, and effort has gone into this project already and we’re now at a stage where we can actually start to create something.  But let’s not forget, the prototype stage is the bit that demands we embrace more of a growth mindset than a fixed one (book recommendation here!).

We think we have the right solution, but much of what we’re designing, unlike a traditional legal solution, isn’t black and white. Up until this point we’ve built our prototype based on a whole host of assumptions about how Awesome Bank’s customers want to engage with them and how easy we think it will be for them to understand their terms. Now it’s time to test those assumptions!

For this, we have to be prepared for failure. We have to embrace it and understand that each time our prototype fails it moves us a step closer to the right solution.

The last three stages of the design thinking process are often intertwined and sometimes the stages might not be carried out in the same order, but typically it would look like this… 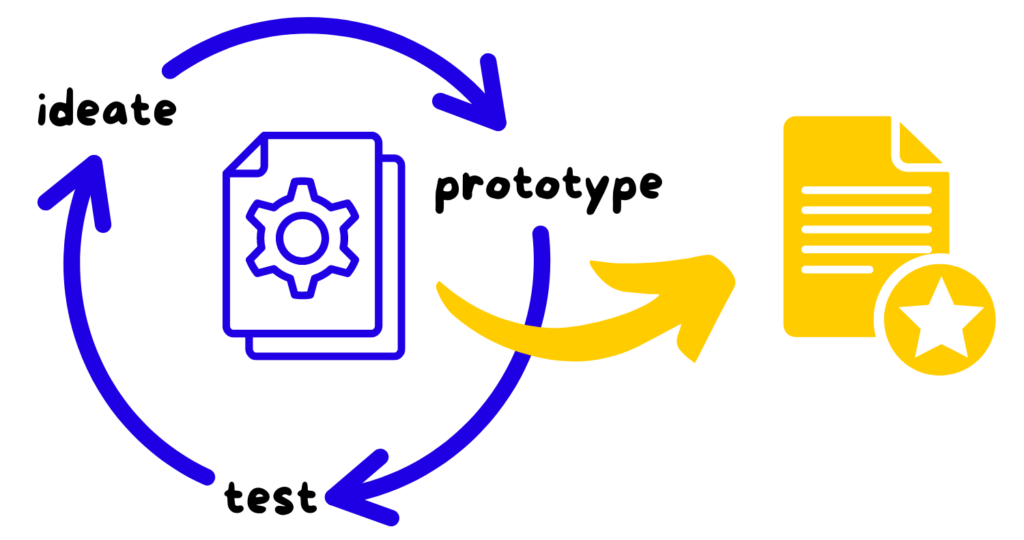 In truth, testing can and should take place simultaneously as we ideate and prototype for smaller elements of a wider solution, but at some point, you’re going to need to put all the elements together and unleash your creation, your V1, on an unsuspecting passer-by!

What’s important here is that we don’t just test amongst the team that created the solution. It has to be more far-reaching than that so that the feedback you gain isn’t blinded by an emotional attachment or any confirmation bias. It’s raw feedback gained from real users and stakeholders that you’re seeking, which might be scary, but let’s remember, at this stage failure is a positive!

So many lawyers I’m sure will cringe reading this right now.

“Fail?! What do you mean fail? How on earth do you think that’s going to go down with our clients?!”

Well, with any luck your clients will be on board with the path that you’ve taken them down. They’ll understand the process, even if they’re not in a sector that traditionally adopts design thinking processes – because you’ll have explained it to them.

Secondly, you’re not charging them by the hour, so provided you achieve success for them within their timeframe, they don’t care how many times you ideate, prototype and test. In fact, the more cycles you complete the better!

the future of legal services is all about design thinking.

Why?! Well we think that there are very few people that could argue the legal industry isn’t ripe for change and innovation. A fundamental question to ask when looking to innovate is ’why?’.

Design thinking processes provide us with a mechanism for answering this question, and then for interrogating those answers to help create innovative ideas and solutions.  Not just for our clients, but for our very own services.

The application of design thinking principles offers us a structure and a formula that’s been proven to develop magnificent products and services in many other sectors and industries.  We think ignoring this fact is a huge mistake.  Here are ten reasons ‘why’…

BUT, we do accept that it isn’t for everyone.  Lawyers have had their standard processes and procedures that have worked (not perfectly for everyone!) for centuries, and there’s an argument to say if it ain’t broke don’t fix it.  The problem is, we think it is broken and it does need fixing – but maybe we just have a different mindset.